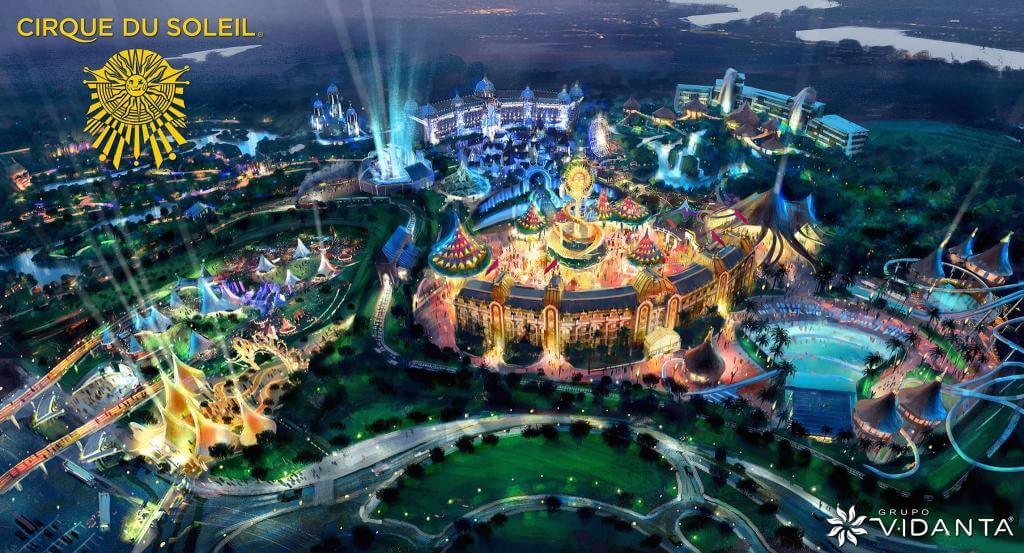 Leading entertainment design firm, Goddard Group has revealed details about the company’s upcoming projects across Asia, in Mexico, and around the world, including four attractions currently under construction.

“Following the phenomenally-successful launch of the $3.2 billion dollar Studio City Macau this past October, we’re very excited to shift our focus to the next wave of game-changing destinations and attractions, ” says Hollywood, California-based Goddard Group Founder & Chairman, Gary Goddard.

“We are now focusing on a host of major new projects in locations around the world, each of them unique and original, and each of them iconic and immersive.”

On Mexico’s Pacific coast, the world’s first Cirque du Soleil resort is under construction (above) close to the resort town of Puerto Vallarta. Partnering with Mexican resort developer Vidanta, Goddard Group is creating the new attraction and it is the first project to come out of the Goddard Group/Cirque du Soleil joint venture.  On track for a late 2018 premiere, the project’s first phase showcases what Goddard says is “the world’s greatest and most-innovative water park – a new kind of experience that could only be done with partners like the Cirque du Soleil.”

Set to open in the summer of 2017, Hengdian Studio’s remarkable recreation of the Shanghai Bund (above) as a new motion picture standing set, along with the first Hengdian Movie World theme park, is close to completion in Hengdian, China. Uniquely, the attraction will function as both a world-class theme park and a studio facility, with the capacity for up to 30 TV and film projects to be in production simultaneously at any one time.

Not far from Hengdian, Haichang Group’s Shanghai Polar Ocean World (below) broke ground in March 2015 and is set to open in spring 2019. Goddard Group’s Director of Design, Taylor Jeffs, says the $600-million dollar sea life park will be a unique experience, providing a strong complement to Disney’s new theme park in Shanghai.

“Unlike Sea World or Ocean Park, both of which evolved over decades, we are enjoying the luxury of being able to design and build this entirely new experience from the ground up. This meant that we were able to really integrate current design philosophies and trends, providing an approach that will allow guests to truly immerse themselves into every facet of the experience.”

Further north, KW Zone’s Kingdom of Poseidon resort (below) is under construction in Harbin. Renowned for its freezing temperatures and ice festival, Harbin has no year-round attractions. With over half of the Kingdom of Poseidon resort enclosed,  Goddard Group will create an all-weather all-year destination. The resort will also feature an aquarium, a waterpark and a retail area along with an integrated family hotel.

Furthermore, Goddard Group will partner with leading Chinese-developer Chimelong and is working closely with their design and management team on a new generation of theme parks, resorts, and attractions. Goddard says the partnership will cover multiple projects. “We believe that Chimelong is currently the market leader in China, and has established a strong grasp of the Chinese market. We’re extremely honored to have been selected to work with them on their exciting future projects.”

Catch up with Goddard Group in Shanghai

Goddard Group will be attending and exhibiting at The Asian Attractions Expo in Shanghai in mid-June and CEO Gary Goddard will speak at BlooloopLIVE Asia on the afternoon of June 13th in Shanghai.  A few tickets remain for BlooloopLIVE Asia so click here for further details.