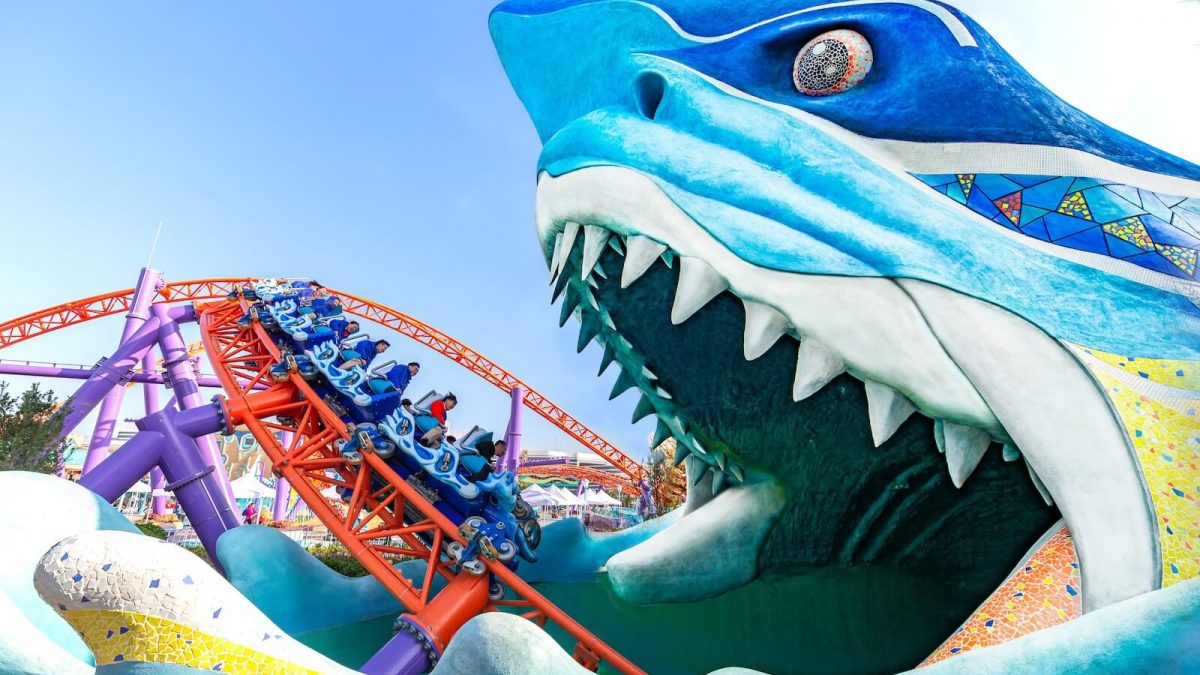 But can the RMB 5 billion ($730m/€640m) Shanghai Haichang Ocean Park match the success of other ocean-themed projects in China?

Ocean Park in Hong Kong remains widely admired within the attractions industry. The 42-year-old park’s setting is spectacular. However, it was the HK$5.5 billion (US$700m) Master Redevelopment Plan implemented by Tom Mehrmann that transformed the hilltop property overlooking the South China Sea into a leaner, cleaner destination with truly world-class facilities.

In contrast, Chimelong Ocean Kingdom at Hengqin Island in Zhuhai – now linked to Hong Kong by a 55km-long bridge/tunnel – was built with the intention to ‘wow’ from the outset. The park features several statement-making rides, attractions, and marine exhibits. It marked a new level of quality for the Chimelong Group when it opened in 2014. Part of the wider Chimelong International Ocean Resort, Ocean Kingdom is now the busiest non-Disney theme park in Asia. 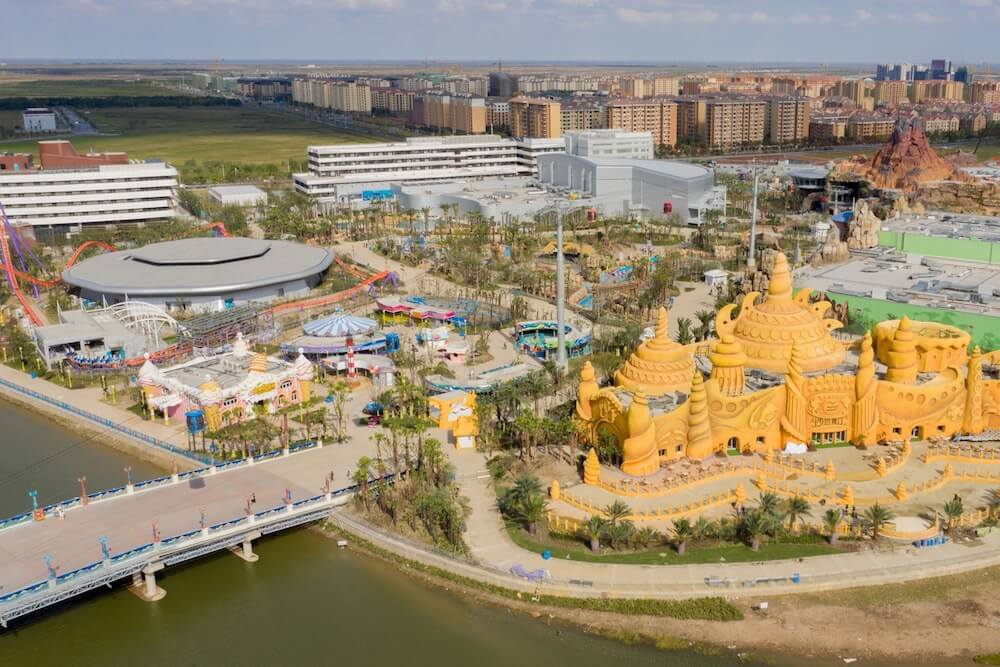 Haichang Ocean Park Holdings is the developer of the new park (above) in Shanghai. It has been in the cultural tourism business since 2002, just five years fewer than Chimelong. Now listed on the Hong Kong Stock Exchange, the attraction operator started out in the northeastern Chinese city of Dalian with the LHT Pole Aquarium. Polar marine animals remain central to its offering as Haichang has expanded to seven other cities around China.

A new player in integrated resorts

Shanghai Haichang Ocean Park opened in November after a five-year period of development. It is the second of three integrated resorts planned by Haichang Ocean Park Holdings. The first, in Sanya, on China’s southern Hainan Island, opened earlier in 2018.

The 29.5 hectares (73-acre) theme park in Shanghai was designed by Legacy Entertainment and anchors what is expected to become a major resort. Situated near Dishui Lake in the city’s Pudong New Area, it is already complemented by a hotel. Awaiting park guests are 30,000 marine animals and mammals. In addition, there are multiple pavilions, show venues, rides and attractions. 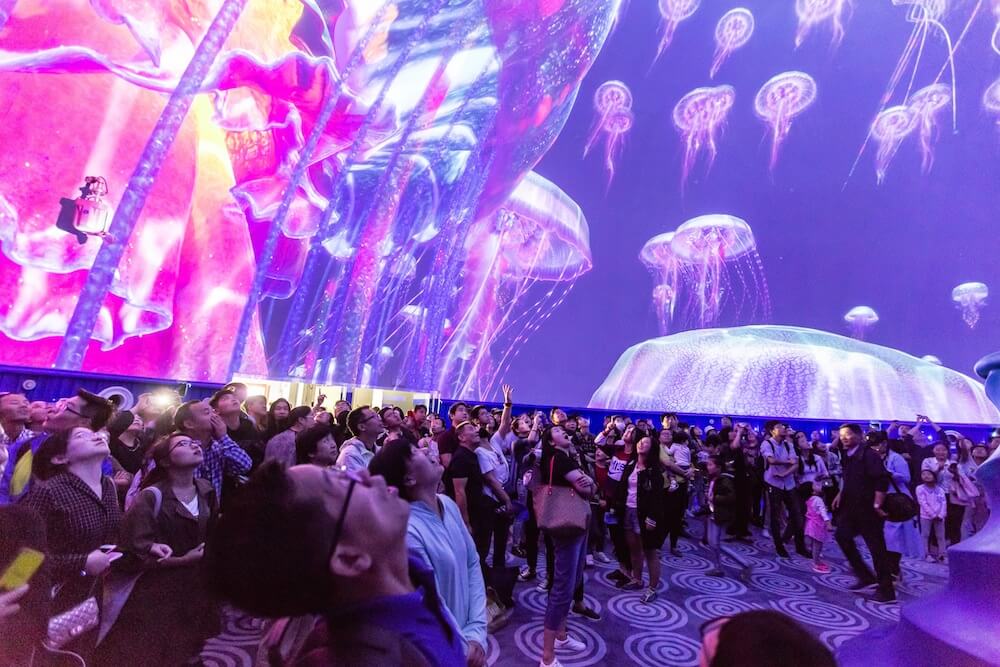 Shanghai was identified as a highly attractive city for Haichang. The company spotted an opportunity for a marine park in the region after the opening of projects including Shanghai Disney Resort, home of Shanghai Disneyland park, and the OCT group’s Happy Valley Shanghai theme park.

“The Yangtze River Delta is one of the Chinese regions with the most dynamic economies, the highest degree of openness, strong innovation ability, and a large absorption of foreign population,” says Wang Xuguang, executive director and chief executive of Haichang Ocean Park Holdings.

“It has the unique geographical advantages of seaport, airport, railway, highway and inland river. Shanghai is striving to become a world-renowned tourist city with global influence.” 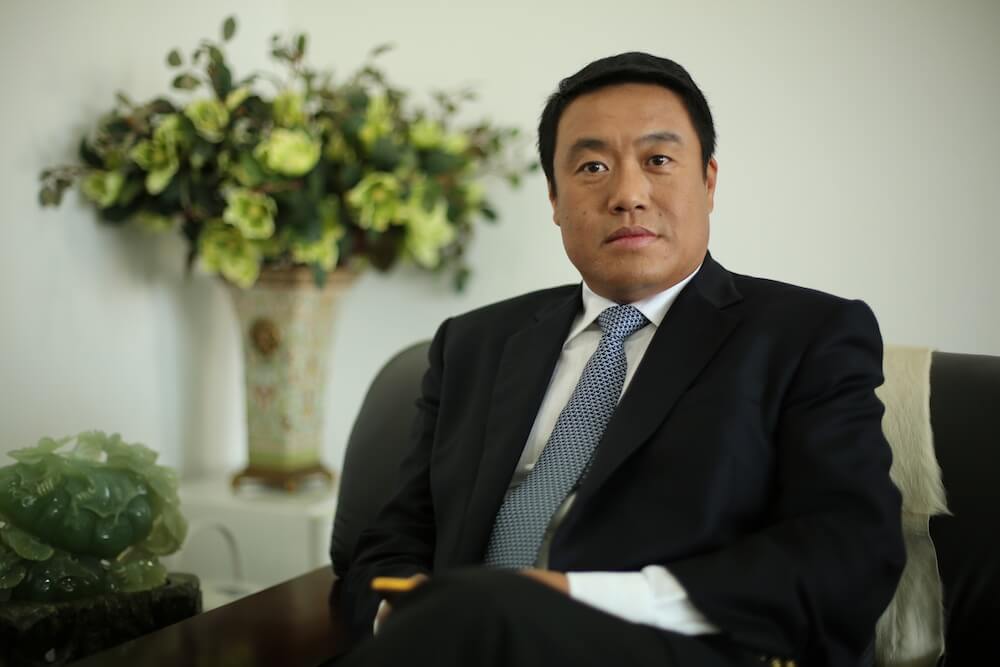 Shanghai’s population currently stands at over 24 million. In the wider Jiangsu, Zhejiang and Anhui provinces, within two hours of the metropolis, there are around 200 million people. Within three hours there are 300 million.

The new park is located 80km from downtown Shanghai. Subway trains will get you there in around 30 minutes from Pudong International Airport or Shanghai Disney Resort, which is a similar journey time by car.

Construction started on what has become Haichang’s flagship project in September 2016. An 800-day construction period followed.

Wang believes the company has created “the pinnacle of all ocean-themed parks built over the past two decades in China.” In addition,, “Shanghai Haichang Ocean Park aims to achieve the top international standards in terms of thematic features, project quality, park scale and construction level.” 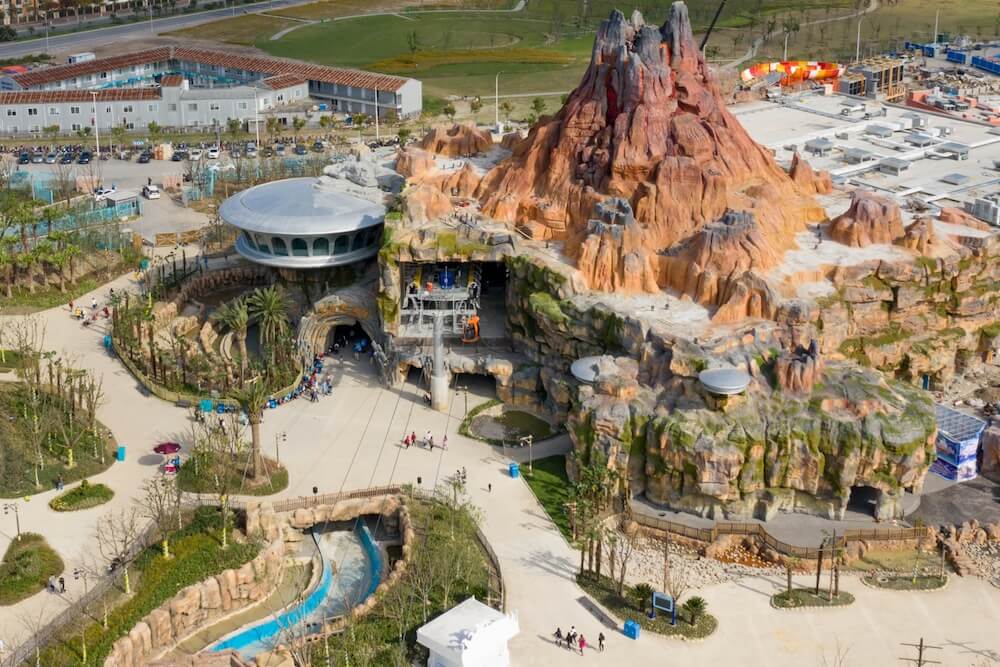 Several leading international scientific research institutions were consulted during the development of the park. In addition, Haichang Ocean Park Holdings sought advice from Ocean Park in Hong Kong, Taiwan Hualien Farglory Ocean Park, Parques Reunidos and several other global theme park, zoo and aquarium operators. Furthermore, it has an ongoing relationship with the Chinese Academy of Sciences and is a member of IAAPA and the TEA.

Pole to pole fun and exploration

As guests make their way around Shanghai Haichang Ocean Park, they will experience what Wang describes as “a virtual image of the south and north poles, of the fantastic deep sea and stunning volcano lava. You may therefore take an extraordinary adventure or just enjoy a wonderful animal show.” 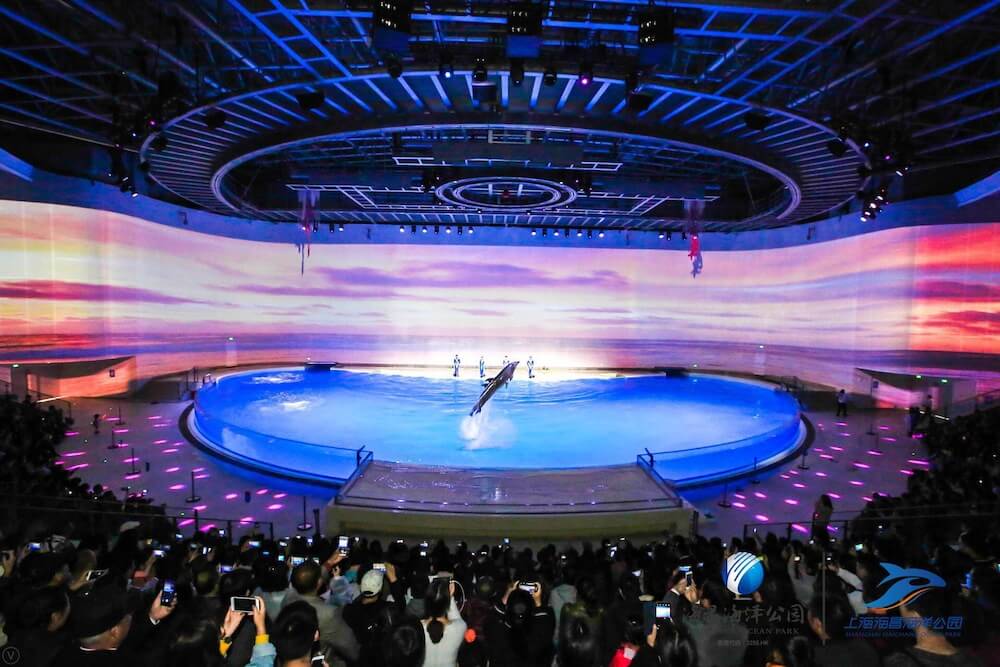 Wang says Haichang Ocean Park Holdings is the leading company in breeding, conservation and medical care of the marine and polar animals in China. At its showpiece Shanghai resort it has created a home for more than 500 animals of more than 30 species.

This is in addition to more than 40,000 fish, jellyfish and coral. As well as Orca whales, there are approximately 500 large sharks from more than 10 species. These include whale shark, sand tiger shark and hammerhead shark. 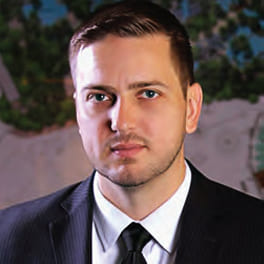 More than a marine park

“Normally, the major aquariums and sea life attractions in China are located in the south,” says Taylor Jeffs, president and chief creative officer of Legacy Entertainment.

“While the northeast of the country is the area of greatest population density, it has, up until now, lacked a world-class marine attraction. Shanghai Haichang Ocean Park represents the first time that hundreds of millions of people are able to see whale sharks, orcas, beluga whales and the many other species presented there.” 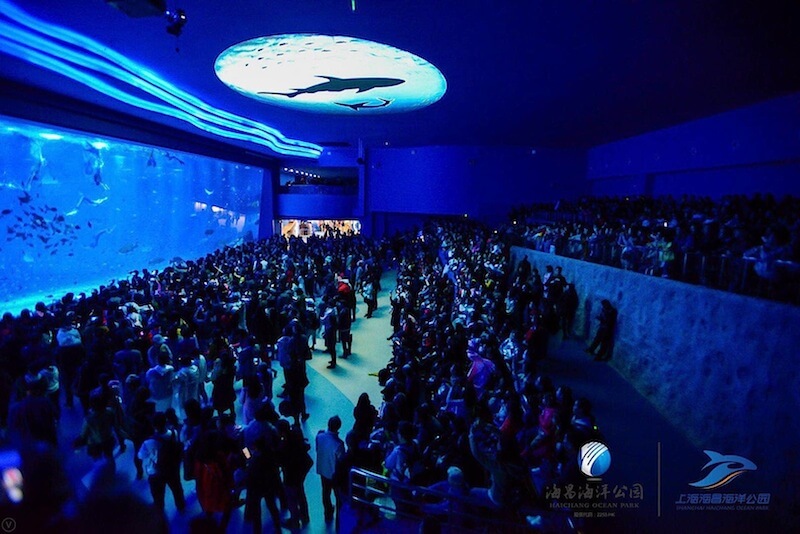 Selected from a shortlist of three design firms, Legacy Entertainment came on board in the early stages of the park’s development in 2013. “We saw what Haichang did and were very impressed,” says Jeffs. “We really wanted to work them. Together we shared the goal of elevating the standard of what a domestic Chinese theme park could be.”

“In addition to the amazing sea animals,” says Jeffs, “the park has a great Intamin launch coaster. It also has the world’s longest rapids ride, which is really neat. There’s a train ride, an aerial skyway gondola ride and a variety of other family rides as well. So overall, Shanghai Haichang Ocean Park is much more than just a sea life park.” 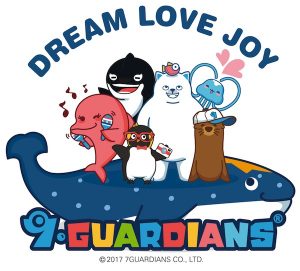 Home-grown IP and an ocean-themed hotel

The park’s wet and slippery inhabitants are joined by a family of friendly mascots known as the 7 Guardians. From a pink dolphin to a bespectacled penguin and a baseball hat-wearing otter, the characters feature in their own stage play.

A flagship 7 Guardians store sells everything from books to plush toys. Outside of the park, the characters live on via their own emojis and social media applications. 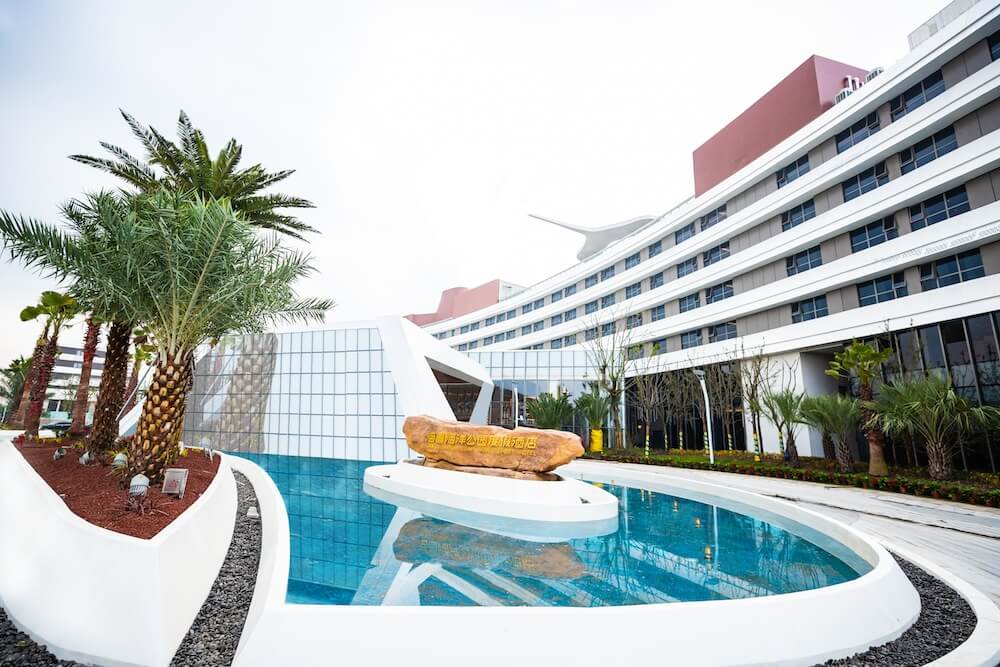 The polar theme is exploited further in the resort’s on-site hotel. This is apparently the first in China to feature an ocean cruise concept. The 5-star accommodation, which welcomed its first guests in December, features a 360-degree panoramic balcony. This offers views out over the park outside.

There is a choice of five animal-themed room types. Most of the 309 family rooms are equipped with bunk beds for children. Together they can accommodate more than 1,000 guests. 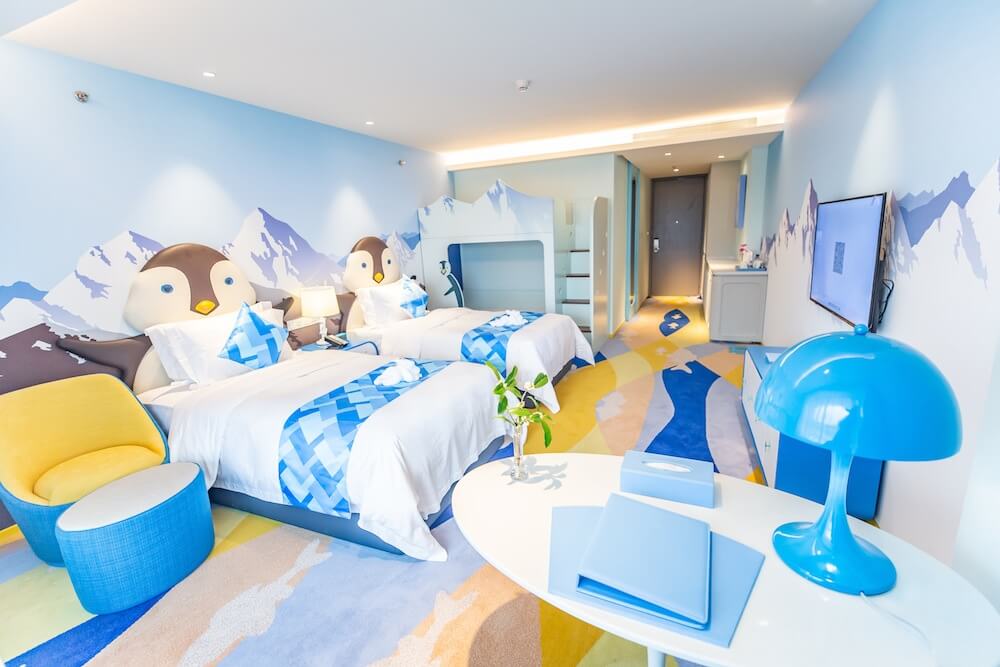 For day visitors, there are 1,600 parking spaces on-site at Shanghai Haichang Ocean Park. Furthermore, a temporary parking lot can accommodate almost 3,000 additional cars. Five bus routes ferry guests to and from the local subway line. Wang says the resort’s catchment area is anywhere within a 500km radius, or two hours by high-speed rail.

As you might expect, interest in the park was high around launch. In particular, coverage of the grand opening was read over 100 million times on the social media platform Sina Weibo. 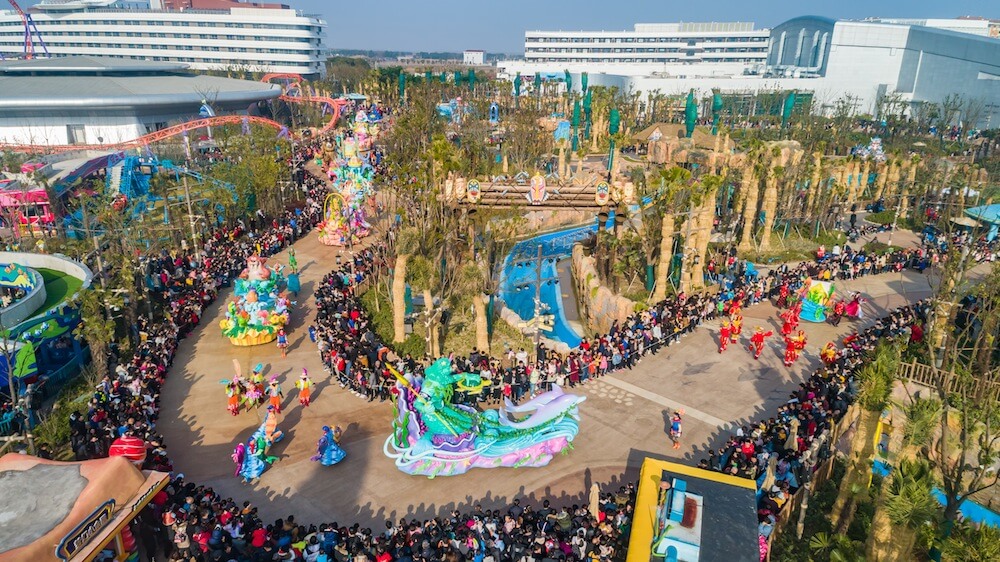 When Legacy started working on the project, the original attendance target was 3.2 million, says Jeffs. “They have since raised that up to 6 million because Shanghai Disney Resort is doing so well,” he adds. “And they are offering general admission at 30 to 40 percent less than entry into Shanghai Disneyland.”

It seems unlikely the park will reach its revised attendance target in the first 12 months. However, it is worth noting that it opened after the National Day holidays. These should provide a boost this coming October. 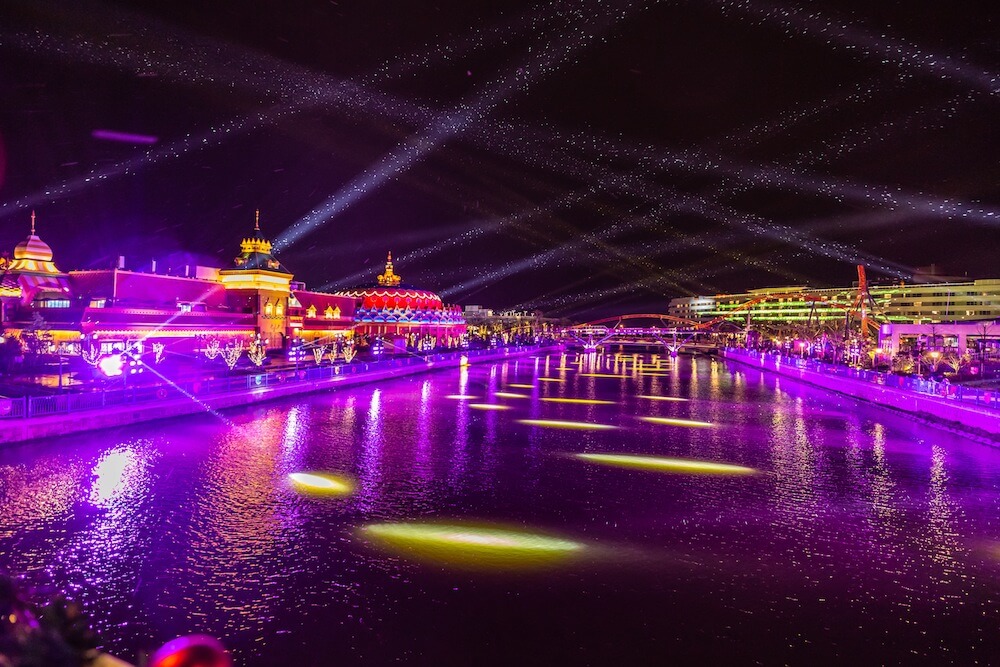 And Shanghai Haichang Ocean Park is now back in the spotlight after being recognized in March as ‘Best Theme Park’ at the Chinese Association of Amusement Park and Attraction’s CAAPA Expo in Beijing. The project’s scale, theming, quality, and high construction standards were all commended.

Plenty more parks in the Ocean

Since the company’s founding in 2002, Haichang Ocean Park Holdings has hosted over 100 million visits. Its ocean/polar-themed parks and aquariums are in Dalian, Qingdao, Chengdu, Tianjin, Yantai and Wuhan. Currently, the group entertains around 12 million annual guests. The opening of the new parks in Shanghai and Sanya will see this figure raise. 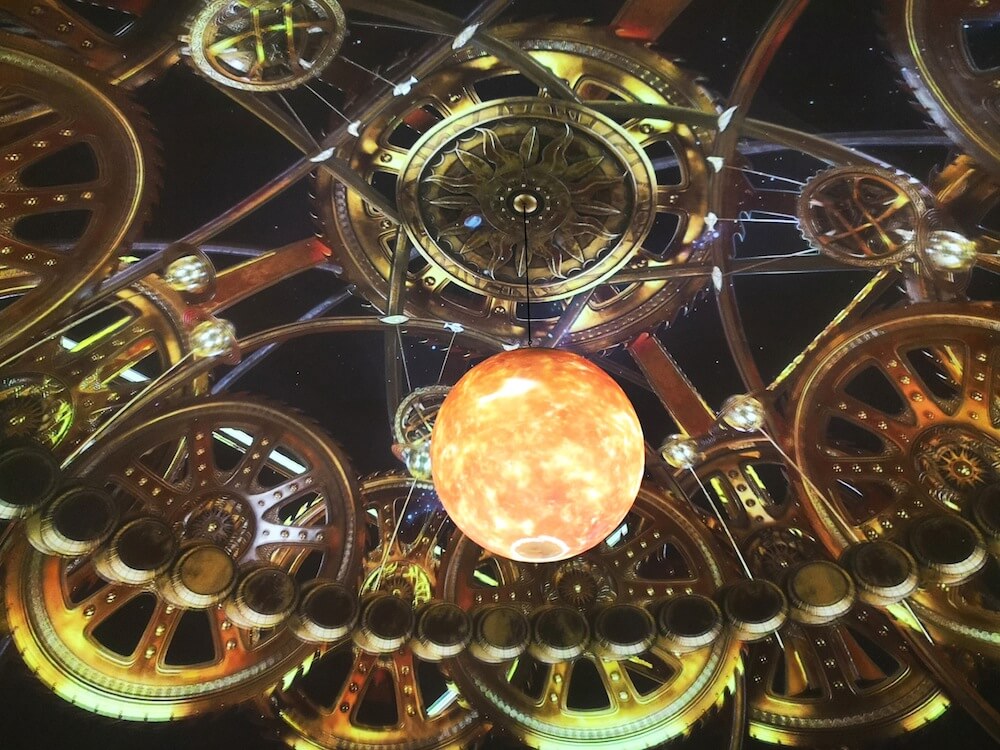 The company has already started planning for the second phase of Shanghai Haichang Ocean Park. Around 1.7 sq km area of green space has been designated for development as an ‘ocean cultural leisure resort’. This was one of the largest private land acquisitions in China for 20 years.

Meanwhile, a new integrated report is planned in Zhengzhou, Henan province. Named Zhengzhou Haichang Ocean Park, it is scheduled to open in 2020. The project is set to comprise three key components. These are an Ocean Park, Polar Park and Future Exploration World. In addition, there will be an ocean-themed hotel and business area. In developing this particular project, Haichang Ocean Park Holdings hopes to “fill the gap of large-scale ocean-themed tourism in the central plains” says Wang. 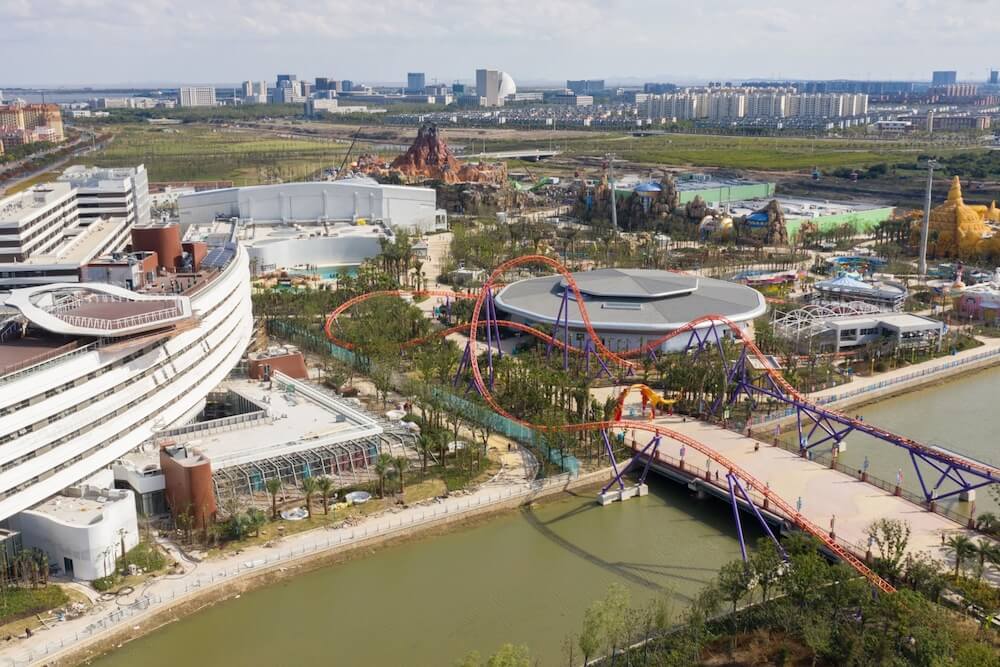 Haichang’s chief executive believes the current wave of theme park development in China is more measured than before.

“The real estate industry and capital drove the earlier investment in theme parks,” says Wang. “We believe that after the boom, the market will gradually calm down. Those operators who have accurate market judgment, forward-looking products, professional operations and quick reaction will therefore win out.”

And he believes the company’s marine park model puts in a strong position compared to some newcomers. “The market segment of Ocean Park has higher access and operation barriers,” says Wang. 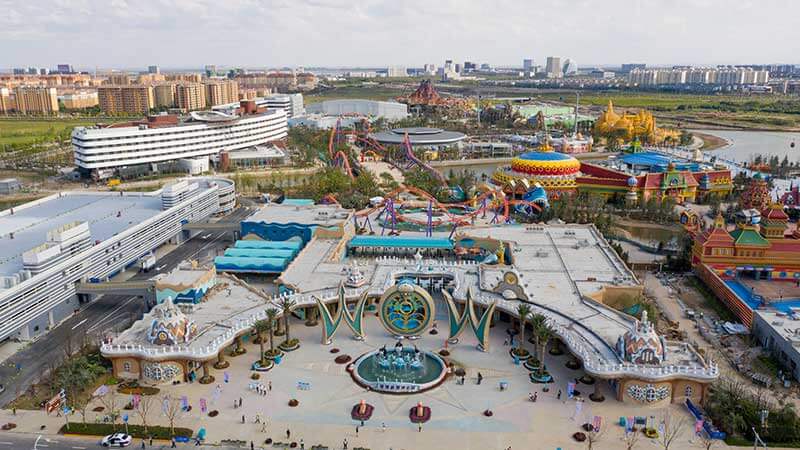 After completion of current projects in Sanya, Shanghai and Zhengzhou, Haichang Ocean Park Holdings will then pursue a long-term development strategy. It will embark on “three years of market cultivation, six years of rapid expansion and nine years of deepening development,” says Wang.

While developing its IP further, the company will also explore opportunities for mergers and acquisitions. Spurred on by the recent CAAPA award, its goal is to maintain a position as China’s leading provider of marine cultural tourism.

“We hope this recognition will also inspire others. We want them to reach for the same standard of animal care and guest experience that Haichang has achieved in Shanghai,” says Legacy’s Taylor Jeffs. 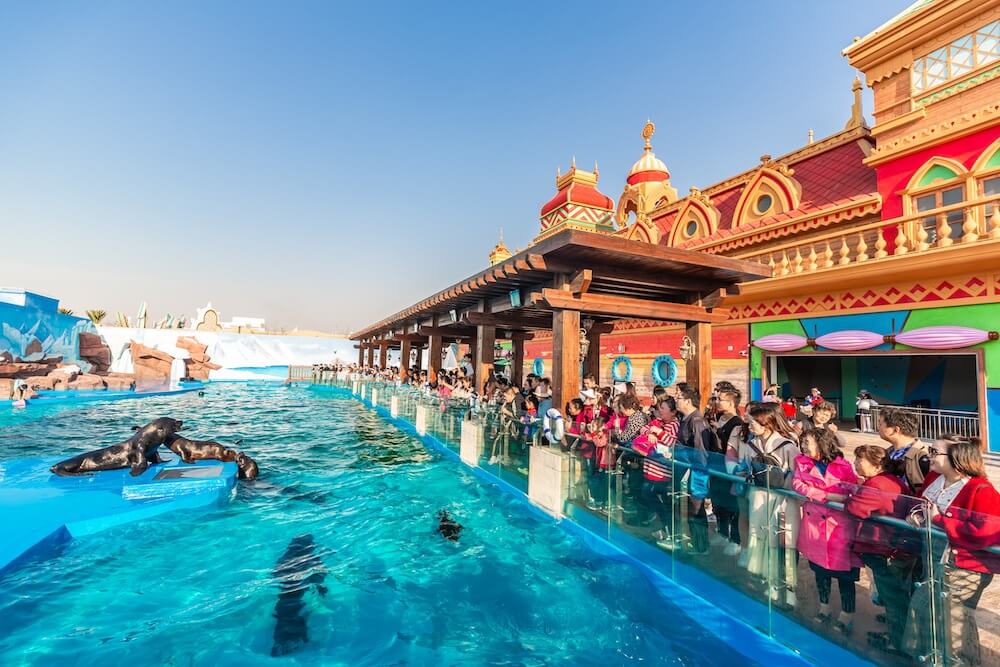