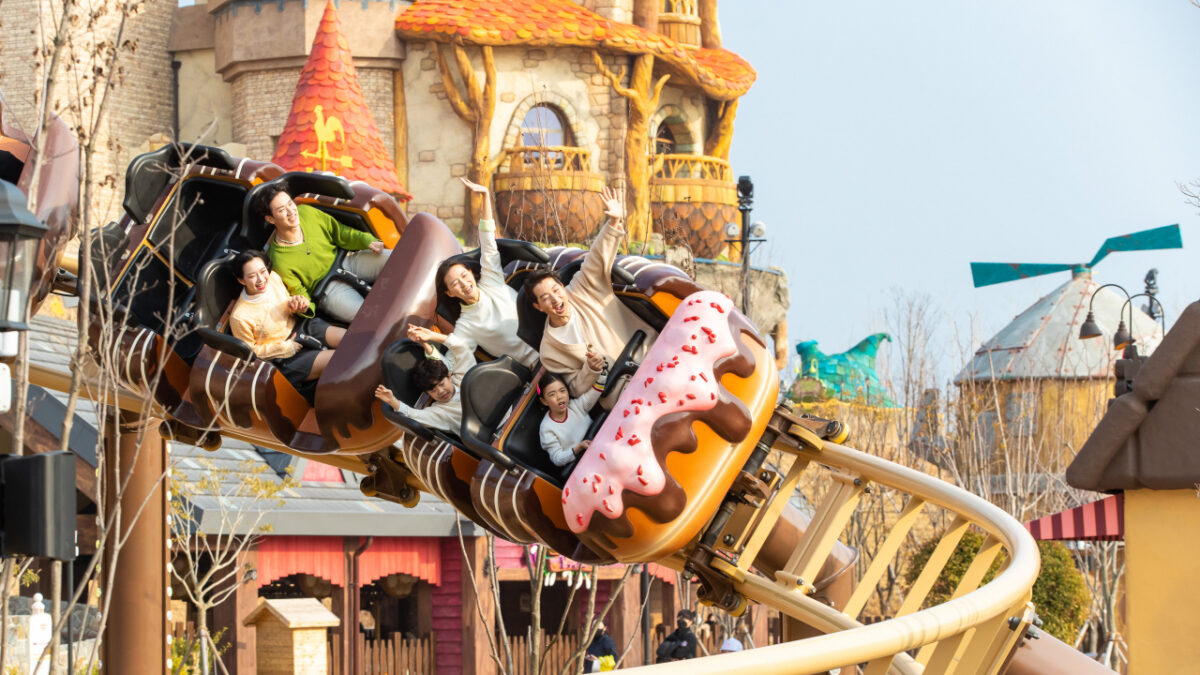 Hollywood, CA, and Busan, South Korea, April 2022 – Thirty-three years after the opening of Lotte World forever changed South Korea’s theme park landscape, the beloved operator’s second park is already causing quite a stir in the southern city of Busan. Following five years of design and construction, local excitement for the new park was so intense that tickets for the first few weeks have already completely sold out.

Lotte World Adventure Busan, as it is officially known, bears little resemblance to its Seoul counterpart. According to the theme park’s designers, Hollywood-based Legacy Entertainment, this divergence is intentional. “In Busan, we wanted to create environments that would be timeless, and that meant not adhering to any particular time or place,” says Taylor Jeffs, one of Legacy’s owners, as well as the park’s Creative Director. “Our goal was to give our guests a stage upon which they could step away from reality and, for a brief moment, forget about the pressures of their everyday lives.”

Conceived to contrast with the gray-toned architecture of Busan’s densely-packed urban districts, the new theme park has been designed with a colorful garden aesthetic, complete with spacious landscape tableaus and sprawling water bodies.

Exploring the park, visitors will discover six elaborately-themed zones, beginning with ‘River Village of Tinker Falls.’ Marked most notably by the towering cascade of Ogre’s Flume (with equipment provided by ABC Rides), this whimsical village leads guests to a central hub where they’ll encounter one of the park’s several icons- a talking tree. Sporting a ‘Spoke and Hub’ configuration best known from Disney’s ‘castle parks,’ guests are likely to return to this central plaza multiple times during their visit.

Each immersive land is packed with its own unique wonders and surprises. In ‘Rainbow Springs,’ audiences will be dazzled by all manner of live performance at the Garden Stage- a nod to the Seoul park’s iconic entertainment venue. Next door in the Wonder Woods, visitors will be wowed by the Giant Splash (Mack Power Splash) and Roller Coaster Restaurant- both firsts for Asia.

The adjacent ‘Queen Lorry’s Royal Garden’ is home to the park’s iconic castle, as well as a fountain garden anchored by a family ride inspired by Tchaikovsky’s Swan Lake. More family fun can be found nearby in Joyful Meadows- a land home to the largest concentration of rides and attractions targeted at families with young children.

Of all the park’s lands, the most exciting is Underland- a thrill seeker’s paradise with a theme and design aesthetic informed by the classic Korean fairy tale, the Ogre’s Magic Club. It’s here that visitors will find two signature attractions- the Giant Swing (Zamperla Giant Discovery), and the Giant Digger (Mack Launched Multi-Looping Coaster).

In the end, Legacy’s hope is that the park will represent a new model for regional theme parks in second tier markets, noting that the entire project was designed and built for less than the budget of a single large attraction at Disney or Universal Studios.

“The last decade has seen an influx of joyless, soulless parks all around Asia, and Lotte World Adventure Busan is proof that it doesn’t have to be that way,” adds Jeffs. “Just as happened at Lotte World over three decades ago, I believe visitors will make an instant and lasting emotional connection with this beautiful park from the moment they first step through its gates – and just like the gardens that inspired it, both that connection and this park will grow stronger and more beautiful with time.”

Lotte World is South Korea’s leading theme park owner and operator, with its flagship park located in the heart of Seoul, South Korea. Since its opening in 1989, Lotte World has consistently ranked among the world’s top-performing theme parks, drawing between 5 and 7 million visitors each year. Located in Seoul’s Jamsil district, the park is divided into two main themed areas- Lotte World Adventure (indoor theme park) and Magic Island (outdoor attraction area). The park features a number of heavily-themed attractions including “The Adventure of Sinbad,” “Pharaoh’s Fury,” and “Atlantis Adventure,” in addition to a number of classic family rides, shows, and attractions. Lotte World Adventure marks the chain’s second full-scale theme park in South Korea.