Legacy Entertainment and Advanced Aquarium Technologies (AAT) are pleased to announce that their new collaboration, a unique new aquarium called The Sea Shell, will be opening early next year on Vietnam’s island resort of Phú Quốc.

The new attraction is being created as part of an all-new theme park development on the island, by Vinpearl, the leisure division of Vietnam’s Vingroup real estate company. The turtle-shaped aquarium will be one of the most cutting-edge and innovative aquariums ever designed. 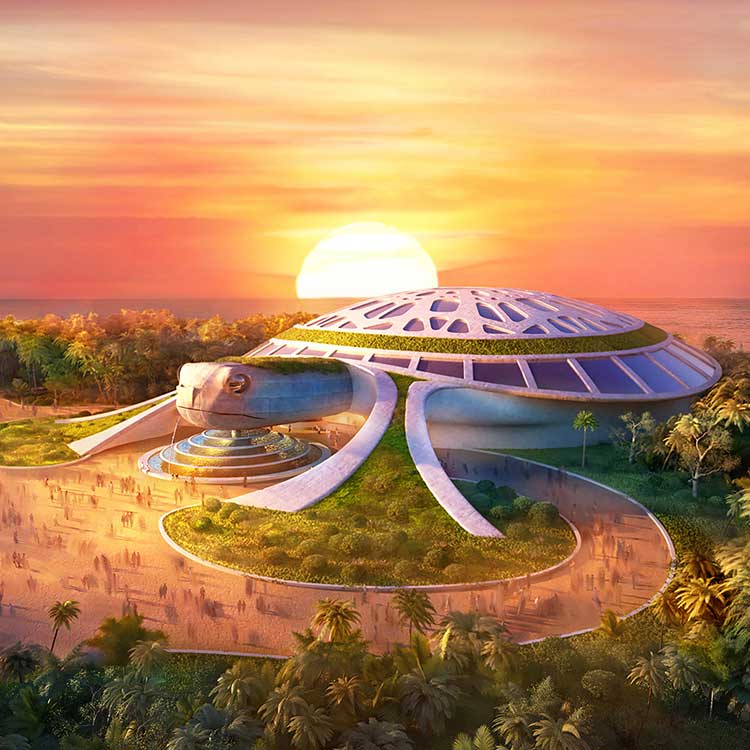 Legacy Entertainment and AAT are experts in the field of aquarium design, with several well-known and successful projects behind them, such as Den Bla Planet, Shanghai Haichang Ocean Park, the Georgia Aquarium, and the new Chimelong Marine Science Center.

Legacy Entertainment was responsible for developing the new aquarium’s instantly recognizable turtle-inspired architectural statement. “With every project, we take on, we like to be inspired by local stories,” says Taylor Jeffs, the firm’s President, and Chief Creative Officer. “In Vietnam, even before working on this project, we had been fascinated by Vietnamese mythology relating to turtles. So when this project began, it was one of the first ideas we honed in on.”

AAT was brought on board to ensure that The Sea Shell would be among the most technologically advanced and humane aquarium facilities in the world. Jason Vanhinnisdael, AAT’s Business Development Manager, says, “From the ample tank design to the state-of-the-art Life Support Systems, Vinpearl’s Sea Shell will be a model for all other aquarium developers moving forward.”

This new aquarium is part of the Vinpearl Land master plan, which will include the construction of new theme park and water park offerings on the island, as well as an expansion of the company’s existing resort facilities.

AAT also recently celebrated the opening of the brand new Oman Aquarium. This has the largest floor area of any aquarium in the Middle East and is a world-class visitor attraction that will inspire, educate and thrill visitors.